There could be many reasons when a home or business owner decides to get new locks for his property. Examples such as employees leaving, tenants moving out, suspicious of a stranger that might got a hold of a key, and others. No matter what the reason could be, there are couple of option that can be done in these cases which are either changing the locks or re-key them. both options had their advantages and disadvantages that should be taken in consideration before deciding on the type of service with a professional locksmith.

Going back at least a hundred years, a re-key service came to life when a locksmith came up with the idea of a lock that was built using pins that can be changed inside the lock. Changing the pins inside the lock caused the original key that came with the lock to be useless. Nowadays, most locks in the market can be re-keyed without any issues with the exception of several specialty high security locks built with a mechanism that will not allow such change or tampering.

Normally, re-keying a lock is a much cheaper alternative for having a new lock installed as in addition to the labor, the cost of locks will add significantly to the cost of the job. Most locksmith technicians will be able to come to location and re-pin the lock for you without any issues while others give you the option to bring the lock to their shop and have the service done there. Before re-pinning the lock, a new key will be made to match the new combination inside the lock. Not only its much cheaper, but also takes much less time than changing the locks. These types of advantages become significant when multiple locks would need to be address such as a big house, or an apartment complex property.

The only significant disadvantage in having a lock re-keyed would be if the lock is suspected to be damaged. Re-keying the lock, normally won't repair any damage or wear that the lock had suffer during time. However, most locksmith technicians do offer lock repair services. Depending on the damage, in these cases, it might be cheaper to just change the locks. 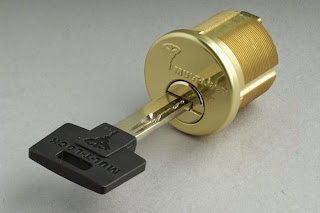 Changing locks on the other hand should be considered if your home or business equipped with standard cheap locks and you are looking to add some security. In such case, re-keying the locks will be useless and getting a high security lock would be recommended. Installing new locks also bring you the peace of mind insuring you the lock will be free of defects and malfunctions. In addition, locks from the leading brands in the industry normally come with a warranty as well.

Aside from the price involving changing the locks, one of the disadvantages can be a compatibility with a specific type of door that is being used in your home or business. In these types of situations, some parts would need to be added or modification to the door would be in place in order to accommodate the new locks and especially if they are high security. These elements might get the price of installing a new lock even higher than expected in the first place.
Posted by Unknown at 11:44 AM